Eye Of The Pyramid 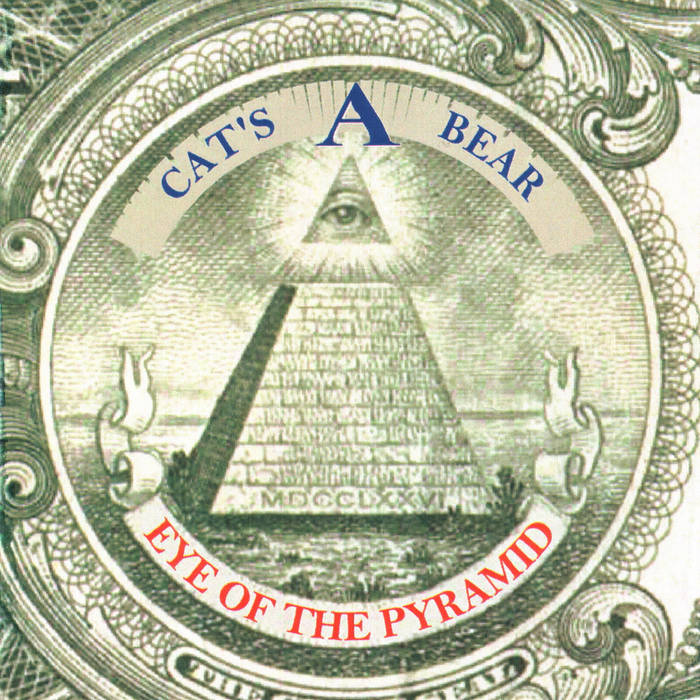 The opening strains of Eye of the Pyramid will bring you into the groove of the title track of this digital Cat's A Bear Album. Originally produced in 1989, the music on this disk is partly-sequenced, funk-based jazz. You begin your journey with Cat's A Bear's take on a conventional funk feel in Eye, followed by The Current Sea, a shuffle-like groove in 25:16 time. Bearskin Rug adds ten, and begins in 35:16 time, with solos in 9:4. All of this will leave you rhythmically ready to relax into Theme For Eric And Eric, where the melodies carry the intensity.

Showing they are not shy of conventional time, Cat's A Bear duo Joe Dorris and Frank Singer take you through Ceiling Street, with an extended solo by Singer on keyboard synthesiser. Double Felix gives drummer Dorris a chance to show you his electronic chops in a drum feature, contrasted by the ballad section of this tune with Singer's jazz-guitar sound.

Following this is the classic first recording of Bill's B.S., here titled William's Overture. This tune appears on Cat's A Bear's Tito: In Search of a Revolution. Closing off the set is Frank's Lament, also titled Frank's B.S., a partner to the previous tune. This tune moves you in an easy 7:4 funk feel, with intricate melodies and lush harmonies throughout.

Eye of the Pyramid gives you sixty minutes of classic electronic Cat's A Bear, a duo that actually played live for many years before Dorris and Singer paired up with Tony Stefanelli and Phil Papotnik, and, of course, TITO. This Album threads conventional aspects of contemporary music with Cat's A Bear's distinct approach to jazz, and will find you pushing play again, or adding Eye of the Pyramid to your favorite Album carriage.

Eye of the Pyramid, 8 tracks of music.

Let these facts enumerated below be known and stated herein for all pertinent records.

Clause 2: All bass and keyboard synthesizer tracks were sequenced by Frank. All drum/percussion tracks and sampled sounds were sequenced by Joe. A (now retired) Macintosh 512KE (Enhanced!™) computer with Mark Of The Unicorn Performer software was used to sequence the tracks. The sampler used was a Prophet 2002, made in 1987.

Clause 3: All compositions were written by Frank (BMI), except William's Overture, by Frank, Joe, and William Dorris. All arrangements by Frank and Joe. No coercion was employed on anyone involved with this project. This is a zero animal testing production.

Clause 2: Production and recording were overseen by Frank and Joe. Final mixing was executed by Frank. All recording was done on a 4 track cassette machine. Electronic drum kit tracks were played live with preset sequences, and solos were laid down last, mixed directly to final master cassettes. William Dorris Jr. allowed the use of his Fender Jazzmaster guitar.

Section 3: Clause 1: History and background. Eye Of The Pyramid, aka eye-o-mid, launched the final attempt by the Frank & Joe Foundation (now defunct) to combine avant garde electronic jazz with financial success. The eye is from the one dollar bill. The Current Sea, aka currency, continued the series in the hopes of generating some. Time signature of 25:16 Patent Pending. The Bearskin Rug, a luxury item, is also a kind of dance known as a rug. Time signatures of 35:16 and 33:16 Patent Pending. Theme For Eric And Eric, aka tfe&e, utilized 23rd chord melodic extensions, in the hope that a hypnotic effect would be produced on those who could extend credit to the Frank & Joe Foundation (now defunct). Eric Sampson (No "A") was an ardent supporter of the Frank & Joe Foundation, and continues this tradition today with Naked Kitty Productions and the Cat's A Bear organization. Eric Dolphy used 23rd chord extensions. Ceiling Street was the Foundation's answer to Wall Street. The intended height was not reached, signaling the downturn of the Foundation's capital advances. Double Felix marks the return of the two cats, Frank & Joe, playing the music of Cat's A Bear, rescinding claim to previously stated Foundation goals. Paperwork was signed to the music of William's Overture, aka Bill's B.S., which is a minor blues in B. Frank's Lament, aka Frank's B.S., closed the books on the Eye Of The Pyramid scheme, and the Frank & Joe Foundation (now defunct).

Section 4: Clause 1: CAT'S A BEAR - EYE OF THE PYRAMID NKP 2001-x1989-T ©All rights reserved, 1989/2004 Naked Kitty Productions. Various multiple time signatures patent pending. No part of this recording may be reproduced, broadcast, copied, transcribed or erased without the expressed permission of the closest person you can find who has a right to give you that permission. Purchase of this Album implies acceptance of all terms and conditions set forth in this contract. No signature is required; however the option exists to voluntarily contact the Cat's A Bear organization at catsabear.com, or NAKED KITTY PRODUCTIONS at franksinger.com.

Clause 3: Cover artwork and design by chelaBOP. Dollar bill courtesy U.S. Treasury. "Authority. 18 UNITED STATES CODE, 504: Treasury Directive Number 15-56 FR 48539(September 15, 1993) 411.1 Color illustrations authorized. * (a) Notwithstanding any provision of chapter 25 of Title 18 of the U.S. Code, authority is hereby given for the printing, publishing or importation, or the making or importation of the necessary plates or items for such printing or publication, of color illustrations of U.S. currency provided that: 1. The illustration must be of a size of less than three-fourths or more than one and one half, in linear dimension, of each part of any matter so illustrated; 2. The illustration must be one sided; and 3. All negatives, plates, digitized storage medium, graphic files, magnetic medium, optical storage devices, and any other thing used in the making of the illustration that contain an image of the illustration or any part thereof shall be destroyed and or deleted or erased after their final use in accordance with this section."