90s Lives of the Cats 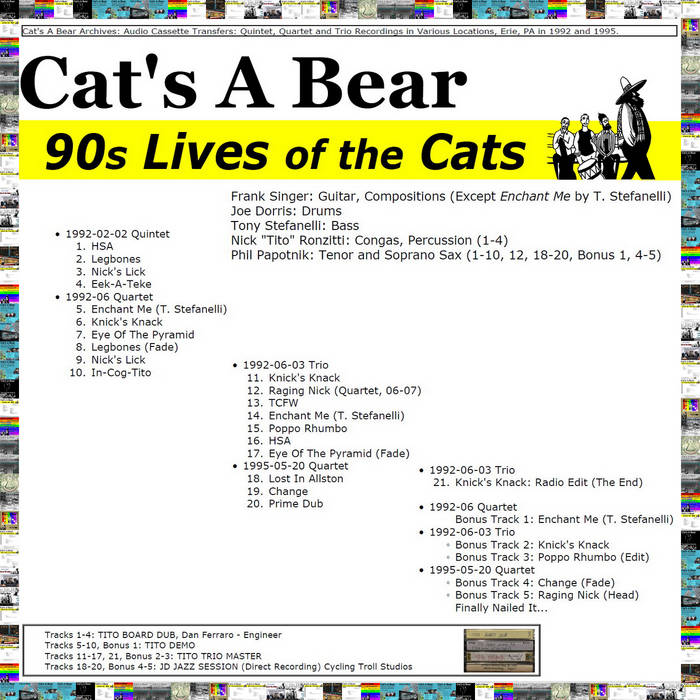 In preparation for the Cycling Troll Sessions Album, recorded in 1993 and 1996, Cat's A Bear recorded in a multitude of formats and locations, seizing every opportunity to put some tracks down.
Much of this is a blur thirty years later, but the thrill of the playing, and the supreme musicianship of these devoted instrumentalists I have been so lucky to be surrounded by, is even more clear now than it was then. The dedication required to perform this music is daunting, and these musicians chose to rise to that challenge for the pure joy and accomplishment of doing so. My gratitude for their bringing my music to life is endless.

The tracks are presented as historically as possible, with the sessions having been recorded in Trios, Quartets and Quintets of various configurations. At the core of these groups is the dominant rhythm section of bassist Tony Stefanelli and drummer and co-founder Joe Dorris, who keep the floor solid and play astounding solos. Nick "Tito" Ronzitti joins us for the first four cuts on percussion, a portend of his increasing involvement in the band. Saxophonist Phil Papotnik features on about half the tracks, and most certainly contributed recording gear and expertise to make all of this work.

Most of these tunes reappear on other albums, many with different configurations of players above that solid rhythm foundation. Two new additions to the song library include 2 versions of Nick's Lick and a full version of Raging Nick, a feisty little tune whos correctly executed head closes the bonus track selections.

It is our privilege to present this music to you, and our hope that you experience some of the delight we do at hearing our young selves explore these tunes.

These tracks are digital transfers from audio cassette. Details of the sessions will be added if and when they become available....

15 Tracks of Jazz Standards from the 1995 Session are available for download on catsabear.com