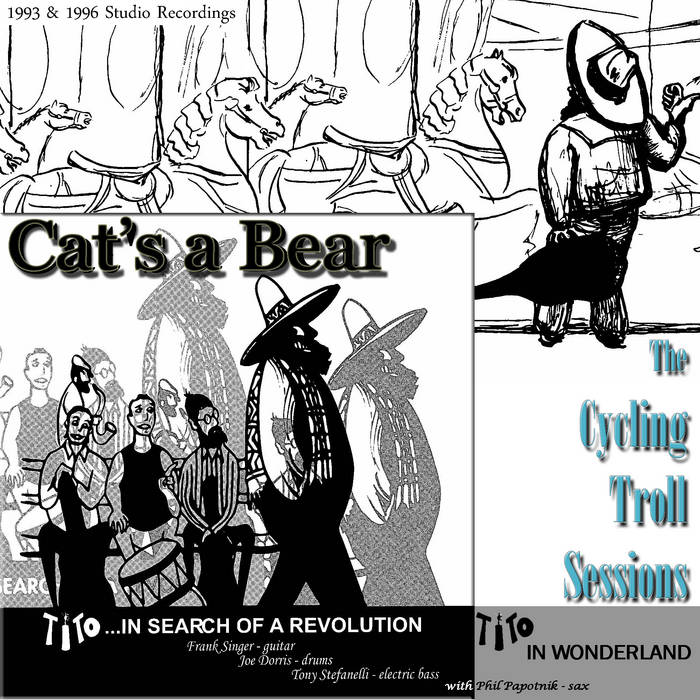 Bassist Tony Stefanelli joined Cat's A Bear in the early '90s, and played for almost two decades with the band, departing to focus on his successful Romolo Chocolates. (romolochocolates.com). Phil Papotnik joins the band for the last three cuts on sax, establishing one of Cat's A Bear's premier Quartets.

Four cover songs from the recordings, featuring drummer Joe Dorris on vocals, are available for download at catsabear.com.

Notes from TITO: IN SEARCH OF A REVOLUTION

Normally, a jazz album sub-categorized as funk or fusion would conjure images of a large, electric ensemble with distorted electric guitar, huge PA systems, and banks of amplifiers. While the musicians on Revolution play with the same energy, the sound is scaled down to a guitar trio, with composer/guitarist Frank Singer's clean Gibson 175 guitar mixing with bassist Tony Stefanelli's Alembic Fretless Electric bass-guitar and drummer Joe Dorris' hand-made Ames drum shells.

In some ways, the subdued impact of the instruments creates space that allows for more intensity from the notes and rhythms. With Singer taking the notes and Dorris taking the rhythms, bassist Stefanelli holds together the texture with melodic, lyrical bass-lines. Singer and Dorris meet in the rhythmic relationship of melody and harmony, and together they forge the form of any song they play.

This trio takes you from funk to latin to swing, using modern harmonic language and linear time. Each musician has straddled the past and the present, and a respectful nod to jazz history is combined with the familiarity with the music of current times, from reggae to rock-and-roll. The songs are presented in traditional jazz format, with written melodies book-ending the improvised solos, although some, like Blue Tito and HSA, have more detailed forms.

Singer, who's guitar style has been compared to Joe Pass, George Benson, Larry Coryell and Wes Montgomery, has a hand in every song, with five his alone, and the rest collaborations with the other trio members. Comparisons to James Blood Ulmer and Ronald Shannon Jackson aside, Singer's writing shows the influence of McCoy Tyner, John McLaughlin and Mike Stern, with a melodic approach clearly affected by contemporary classical music.

Bassist Stefanelli, student of Dave Holland, lends his warm fretless-electric sound to the mix. His bass-lines compliment Dorris' drumming perfectly, keeping the sound full at all times. This rhythm section creates a unique backdrop for the presentation of songs, with each player standing out in solos and blending in in ensembles.

Tito: In Search of a Revolution is a unique jazz trio album. For those who appreciate the space and detail of precision players who know how to jam and have fun, this is a perfect mix.

TITO: IN SEARCH OF A REVOLUTION, 8 tracks of jazz.

Notes from TITO IN WONDERLAND:

Tito, Wonderland, and the Blues (for Alice)

Sad and blue and hooked on the juice
Alice had a man for who she'd coo
And everything would be taken care of
Her needs would totally be supplied
Life would be high
To hold him and squeeze him, mold him and kneed him
Into a prize so fine, white knight divine.
( - J. Dorris, ©1993 )

So begins the journey, back in time and sideways in style, of Tito in Wonderland. You meet Tito in Blues For Alice, the classic Charlie Parker tune. Once again, he has lost everything to a woman certain to be "the ONE", who turned out to be "the ONE" who sold most of his stuff and then kicked him out of his own house after making him give her the keys to the car.

Yet still, he cannot stop thinking of her. "Sweet Sugar drips from her lips," he thinks, quoting from Stanley Turrentine, "that Sugar, she's mine..."

His devoted followers and fellow band-members suggest it might be time for Change. Tito remains inconsolable, sinking into despair as day fades into darkness.

Of course, there is only one cure for what ails our suffering hero. Once he meets that next "certain someone", life will again be sublime. Midnight will recede as dawn begins to light the skies, and Wonderland will be just around the bend.

"Every bumblebee fills with jealousy when they see you out with me."
he says,
"Your confection, goodness knows, my Honeysuckle Rose."

Cat's A Bear can only shake their heads and play some Reggae, so Prime Dub closes out the set, leaving Tito in Wonderland to start the cycle all over again. Maybe this time, things will be different...


Jazz Standards from the Cats

Tito In Wonderland marks Cat's A Bear's debut expedition into jazz standards. While each member of Cat's A Bear has a long history with jazz standards, the group has generally explored new and original music forms and styles, leaving the standards for conventional gigs and recordings. Bringing Joe Dorris' vocal talents to the front and showcasing four standards, this album shows the deep connection to the music that set the path for each of the players, and the band itself.

The group does not totally leave behind their distinctive style of original music. Two cuts by guitarist Frank Singer, Change and Prime Dub, carry on the Cat's A Bear tradition. Both are instrumental compositions, each with a unique twist. Change moves through different time signatures as part of its form, and Prime Dub takes jazz into reggae and back again. Both tunes represent the Cat's A Bear sound.

Hear that sound on TITO IN WONDERLAND, 6 tracks of jazz.

THE COVERS FROM THIS ALBUM ARE AVAILABLE FOR DOWNLOAD at catsabear.com