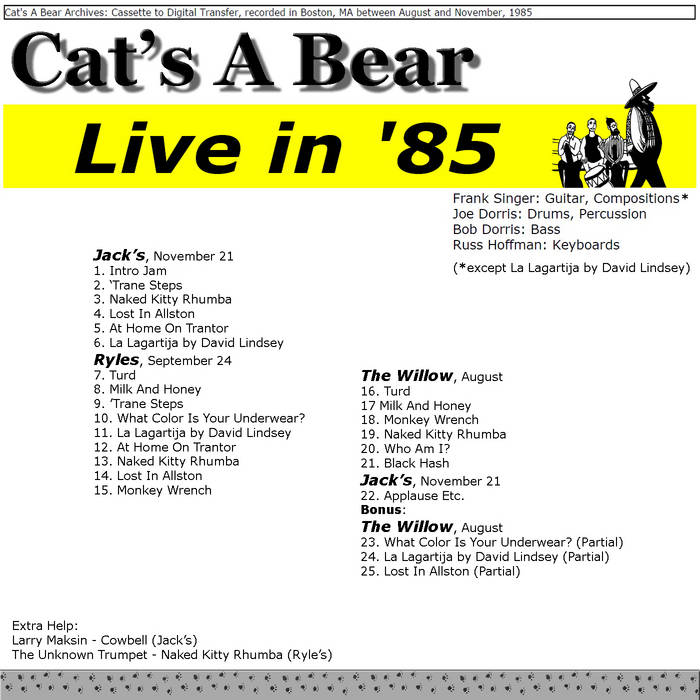 From 1984-1986 the Quartet of Frank Singer, Joe Dorris, Bob Dorris and keyboardist Russ Hoffman formed one of the most powerful versions of Cat's A Bear in its 40 year history. The clubs in Boston were hopping, and Jack's, Ryle's and the Willow were mainstays of the progressive Jazz scene.

In a very short time, Cat's A Bear developed an intense repertoire and a crowd of followers who thrived on the result. This Quartet recorded three tracks on the Euphoria Sessions in 1984, and until recently that seemed to be all that survived from that period.

A recent discovery of three cassette tapes in excellent condition led to the digital extraction and editing of these tracks, and the result is this album, a presentation of three shows in the latter half of 1985. The band is at the peak of its game, playing hard and loose from the opening jam to the only known recording of Black Hash.
Four live cover tracks from these gigs are available for download at catsabear.com along with a chart of Weather Report's American Tango/Cucumber Slumber Medley, one of the band's favorite covers at the time.

Come along for the ride, and experience Power Jazz with Cat's A Bear featuring keyboardist Russ Hoffman.