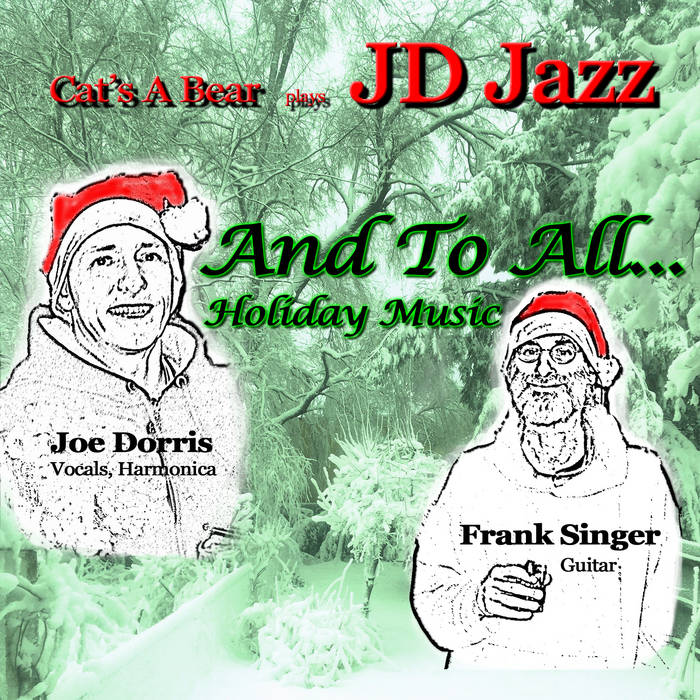 Download includes a Live Bonus Track of Cat's A Bear playing God Rest Ye, Merry Gentlemen | Give It A Rest, Man and PDF Charts for 10 Tracks.

Now 50, Singer has been playing guitar since age 11, and most area jazz fans are familiar with his playing -- intelligent, expressive, swinging, and often a technically dazzling mix of rich chords and fleet, cleanly articulated single-note runs.

You'll hear plenty of Singer on the CD, not only soloing, but also in his intros and often exciting and sensitive accompaniment of Dorris' soulful, swinging, scat-filled vocals.

While Dorris' rumbling, raucous powerhouse drumming is a familiar sight and sound, his singing will catch many by surprise because he doesn't do it that often.

Dorris sings it on ten cuts, all favorite Holiday classics like We Wish You A Merry Christmas and Jingle Bells. The music comes with a twist, however, as JD Jazz injects the music with its own style.

O Christmas Tree ends up as a 12-bar blues, and Deck The Hall uses the 'Take Five' groove. Jingle Bells shows up as a Latin groove, with Giant Steps changes under the hook. Many of the tunes are migrated from 3/4 time to a straight jazz walking-4, and the night ends with a shuffle-style blues version of Auld Lang Syne.

This music is jazz-saturated, as these accomplished musicians tackle another project together. Their almost-telepathic rapport brought many of these songs together on the first take, which has become typical over their years of partnership.

An encounter nearly 30 years ago in Boston became a musical partnership and friendship that thrives today as a major contributor to the Erie jazz scene.

Almost since their first meeting at a jam session in Bean Town circa 1979-80, guitarist Frank Singer and drummer-vocalist Joe Dorris have been a sort of "Frank and Joe Show." They brought their act to Erie in 1990.

If you're a jazz fan in Erie, almost anywhere you turn, you will find one or the other or both in bands or in the thick of jazz activities. Both are volunteers for JazzErie.

Their major collaboration comes in the group Cat's a Bear. Singer also is a member of One World Tribe and J.D. and the Sons of Rhythm, and he and Dorris shared the bandstand in pianist Basil Ronzitti's house band backing major out-of-town artists at the late, lamented Papermoon.

Most of these contributions have been with Joe at the drum set, and Frank at his trusty guitar. Dorris has used his voice often over the years, and at the turn of the century decided it was time to develop his singing more. He has pursued his goal of jazz vocals by jamming as a vocalist, and finally releasing a local CD of jazz standards called 'And That's OK...'

Which brings us to 2009, Joe Dorris at 53, and a voice that it would be an understatement to describe as unusual.

Dorris suggests you think Tom Waits, Louis Armstrong, and Dr. John for starters, as others do.

Gravelly, gruff, growling, his voice is the lowest of the low. Almost painful to listen to at first, it grows on folks who realize there is more to singing than tonal purity.

'Singing allows me to be a better drummer because I learn the melody of lots of songs,' Dorris said.

'I'm proud of my singing. I've gained a lot of acceptance,' he said, adding after a pause for dramatic effect, 'A lot of people think I sound sexy.'

Have yourself a jazzy little Christmas, thanks to Mary Singer.

She's the wife of gifted guitarist Frank Singer, an Erie music veteran who plays in several groups, including One World Tribe, Cat's a Bear and JD Jazz with distinctive singer Joe Dorris.

"Hey. You guys need to make a Christmas CD," she told Frank recently.

The whirlwind result, "And to All ..." features 10 holiday standards you've heard before but not like this. By using jazz chords and time signatures and showcasing Dorris' deep, husky vocals, the set has a hip, intimate, late-night, borderline beatnik feel.

It's a Christmas CD that Tom Waits might worship.

"We jazzed it up," said Dorris. "We changed the chords to more traditional bop and bebop sort of chords. And we changed the time, like on 'Deck the Hall,' which is in 5/4. We took 'Auld Lang Syne' and turned it into boozy blues with harmonica."

For both, it was important to create something fresh, a holiday CD with a twist.

"We tried to make it interesting and make the songs stand out but also have a vehicle for jazz improvisation," Singer said.

"We got rid of the sweetness, the saccharine that occurs with Christmas songs," added Dorris. "They are always so sweet, sometimes when they shouldn't be if you listen to the lyrics. 'We Three Kings' has six sets of lyrics. We sing the one that talks about being buried in a stone-cold tomb."

Dorris and Singer have played together since they started Cat's A Bear in Boston in 1982. Their seasoned musical chemistry helped them cut "And to All ..." in record time.

"We were pressed," Singer said. "We didn't talk about this until almost the middle of November. We recorded it in two sessions at my house; I have a little two-track recording studio. We mixed it and mastered it and had it out in a week and a half."

Copies of "And to All ... " are available locally at Romolo Chocolates, The Jive coffeehouse and Fairview's Lynch Music, as well as online at catsabear.bandcamp.com

They also play a holiday set on Saturday at 2 p.m. at the Jive, 1014 State. Bassist Steve Trohoske will join them for both gigs, and sax player Phil Papotnik may sit in for tonight's show, as well.

Both are BYOB: Bring your own bread pudding.

Download includes a Live Bonus Track of Cat's A Bear playing God Rest Ye, Merry Gentlemen | Give It A Rest, Man and PDF Charts for All Tracks.